Who Needs A Financial Advisor When Markets Only Go Up?

Like many others, I’m drawn to “comeback” stories. It’s no surprise, then, that the history of the world’s rarest and most ancient dog has stuck with me.

For more than 50 years, the New Guinea highland wild dog was thought to be extinct. But in the 2010s, a few reported sightings led researchers to take blood samples that confirmed the existence of a healthy, viable population hidden in a remote region.

You might be wondering how this story can possibly relate to the question posed in the title of this blog. Well, for me, it’s that the past 10+ years have led too many investors to devalue the role of a financial advisor by turning advising into an à la carte menu. Many still value financial planning, but they’re second guessing whether they need an investment quarterback. However, at Blueprint, we see signs of revival.

For more than 10 years, we’ve been living in a massive case study about the power of recency bias. For investors, almost every data point could lead them to conclude that having a financial advisor to serve as their investment quarterback has become irrelevant, including:

For investors whose “coming of age” in terms of personal investing has happened all or mostly after the Great Recession, the shunning of financial advisors is particularly profound. The chart below highlights the shrinking reliance on advisors among the under-45 crowd.

“It’s easy to manage $500,000, $1 million yourself,” one 26-year-old told The Wall Street Journal in the same November 2021 article that included the above chart. Michael Martocci, a startup founder, says he spends less than an hour a week monitoring his investments and funnels 90% of his money into crypto.

Recency bias isn’t only impacting how investors perceive the role of advisors, but also thinking around return potential. The next chart – which strikes me as mind-blowing – speaks to this point. 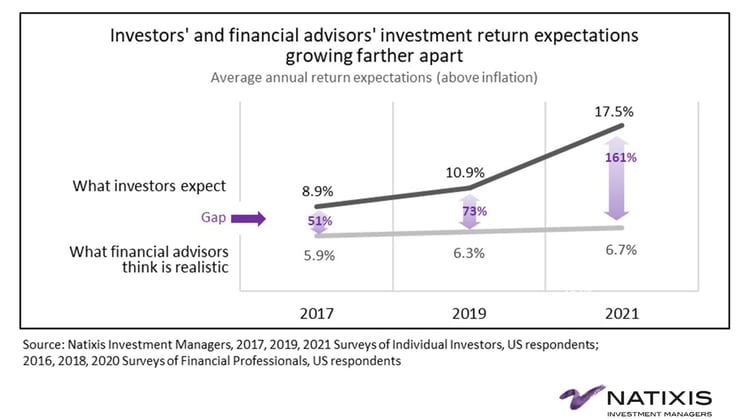 This chart holds the answer to the question posed in the title of this blog, in my opinion. Who needs a financial advisor when markets only go up? Answer: Most investors, but especially those who think markets only go up, because those individuals seem at risk of capitulating from their plan when (not if) markets sustain a longer-term drawdown.

Full market cycles include large drawdowns. That’s often when financial advisors, in their role as investment quarterback, can really show their value. Part of the value may be in hindsight, at least for the financial advisors who focus on wealth preservation, as they are likely to have already guided their clients into risk-managed investments. But the other part is in real time, when advisors serve as an investment therapist, if you will. Advisors provide the reassurance individuals need to stick with their financial plan, even if the client’s inner monologue is telling them to bail out of the market.

But what happens to the investors who don’t have someone to quiet that inner voice that’s telling them to run, who aren’t properly risk-managed, or – even worse – both? If you were around in 2008, you know the answer; it’s disheartening because it’s so avoidable.

And it’s not just individuals without an advisor. I believe investors in the growing flat-fee segment of the advisory space will largely suffer the same fate when a sustained bear market takes shape, as will investors who utilize a traditional AUM fee-based advisor if theirs is one of the many who have ignored prudent management of risk and investor behavior.

Now more than ever, the level of disconnect between investors’ expectations and advisors’ outlooks shows that investors need an advisor who can be both financial planning coach and investment quarterback to help with:

The ‘Comeback’ of the Financial Advisor as an Investment Quarterback

Something that keeps me up at night lately is a nagging worry that too many investors are ill-prepared for a sustained market correction, especially if they’re nearing retirement age. I don’t mean this hyperbolically, because I know people in my own life for whom I’m concerned. I wonder if their overly euphoric approach to investing the last 13 years could permanently impair them from reaching their financial goals when their portfolios experience the next market drawdown.

Given how strong the grip of recency bias is on many investors, I think the unfortunate reality is that it might take a meaningful market shock or drawdown before they reassess their thinking around the role of an advisor.

Advisors who have been and continue to focus on building strong relationships, providing modernized client service, and outsourcing to offer a robust suite of services under one umbrella will be well-positioned for the “comeback.”