Famous Straw Men: The Scarecrow and the Best 10 Days Rule

We are clearly in an unprecedented environment where many are referring to the novel coronavirus as an "invader" of our country.  Elections are being postponed in Ohio, residents are being ordered to stay home in some jurisdictions, and businesses that normally never close are now shut down. From an investment perspective many advisors will refer to conventional wisdom as a way to calm clients. One example is the best 10 days rule, and we believe it is a myth.

"For I consider brains far superior to money in every way. You may have noticed that if one has money without brains, he cannot use it to his advantage; but if one has brains without money, they will enable him to live comfortably to the end of his days."  Scarecrow, "The Wizard of Oz" 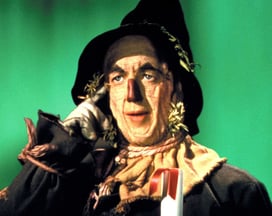 My mother has always been a big fan of Victor Fleming’s "The Wizard of Oz".  When I was a kid it would be on TV at least once a year, and mom always made a point to watch it. I usually joined her...up until the part where the witch and her creepy troop of flying monkeys showed up. From there I would typically escape somewhere to avoid them until they returned later that night to rule in my nightmares...

The characters are all memorable due to some of the basic themes they represent but my favorite is the Scarecrow. He values a brain over anything else and in an ironic twist he turns out to be the wisest of the group – a strawman if you will.

A recent running of the classic, combined with the extreme volatility in the markets, has me thinking about other famous strawmen.

Strawman Argument: an intentionally misrepresented proposition that is proposed because it is easier to defeat than an opponent's real argument.

The Other Strawman – The Best 10 Days Rule

Besides the Scarecrow, my other favorite strawman is an argument offered by those who believe that buy and hold is the best way to succeed in the financial markets. When discussing different approaches such as dynamic allocation strategies, one will typically hear something like, “Well, what about the best 10 days rule?”

For those who may not know, the best 10 days rule is the concept that missing just the 10 best days in the stock market dramatically reduces your long-term return. This is almost always used as a justification for staying fully invested in stocks regardless of the environment.

What makes it a strawman argument is that it leaves out critical information and misrepresents what an alternative approach might do instead. It also assumes that one would intentionally develop a strategy that misses only the best days in the market, which is ridiculous. Complicating matters is that the argument is technically true – missing ONLY the top 10 BEST days does reduce return. In fact, it cuts it by 43%. 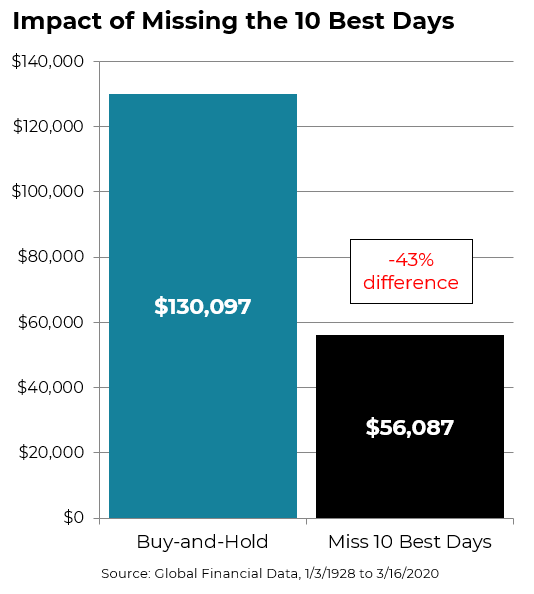 The adjacent graph illustrates the impact on ending value of missing ONLY the top 10 best days to buying and holding the S&P 500 Index. This is based on a $1,000 initial investment since 1928. But this is not the whole story of this strawman.

Now segue to recent market behavior. For those wondering just how volatile the market has been, Monday, March 16 represented the largest daily decline since October 1987 and third largest since 1928. In addition, Thursday, March 12 is now the eighth largest daily decline since the Great Depression. Neither the tech bubble bursting nor the financial crisis caused these types of extreme declines in the S&P 500. The table below shows the best 10 and worst 10 days since 1928.

Astute readers will recognize something interesting about the timing of the best 10 days and worst 10 days.  When observing the 10 best list, one may notice these tend to occur not in favorable environments, but rather in periods of instability and uncertainty. In other words, volatility begets volatility.

WHAT MATTERS MOST: PARTICPATING IN THE BEST, MISSING THE WORST, OR AVOIDING BOTH EXTREMES?

The next question a reader may ask is if volatility is, "If volatility is clustering, then what happens if you avoid both the best AND worst days? Further, is there a reliable to way to do so?" My response is the same as Hans Landa in "Inglourious Basterds": “That’s a bingo!”

It just so happens that a simple trend following strategy indicating a buy (or hold) when the average close of the last 10 days is above the average of the last 100 days, and a sell when the inverse is true, would have avoided all 10 of the worst days since 1928. On the flip side you would have missed/sacrificed eight of the best days.

According to the basic idea of the best 10 days rule, one might assume that performance of this trend following strategy would be severely hindered because it captured just two of the best days.

The graph below compares the performance of buy-and-hold versus missing BOTH the 10 best AND 10 worst days. It turns out that missing both provides a greater return than buy-and-hold but with less volatility. This ratio leads to better risk-adjusted returns while also providing a much better investor experience for clients.

Fast forward to six months from today and assume markets have normalized from a volatility perspective. Now imagine how much better an advisor’s recent client meetings could have been if they could illustrate for the client that their exposure was reduced before the chaos began using a simple, repeatable process that will resume exposure once volatility dies. I wonder if having this type of narrative in place might be a competitive advantage for goals-based advisors.

The Journey Affects Arrival at the Destination

"If anyone treads on my toes or sticks a pin into me, it doesn’t matter, for I can’t feel it. But I do not want people to call me a fool…" – Scarecrow

At first blush, the best 10 days rule is a compelling thought, but upon deeper inspection is a distraction from the importance of investor behavior. Absolute returns are the destination, but the journey matters. Providing a more comfortable ride can give advisors an important moat in this increasingly competitive industry. More importantly, it allows their clients to stay the course during unprecedented periods in market history.

As always, Blueprint is here to help. Feel free to reach out. 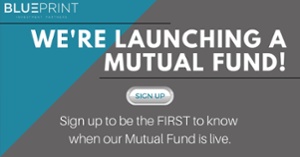